The Bishop's ‘ō‘ō or Molokai ‘ō‘ō (Moho bishopi) is a member of the extinct genus of the ‘ō‘ōs (Moho) within the extinct family Mohoidae. It was previously regarded as member of the Australo-Pacific honeyeaters (Meliphagidae). Lionel Walter Rothschild named it after Charles Reed Bishop, the founder of the Bishop Museum. 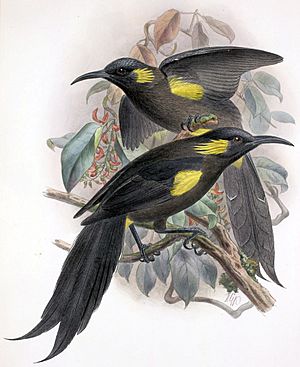 It was discovered in 1892 by Henry C. Palmer, a bird collector for Lord Rothschild. Its length was about 29 centimeters. The tail had reached a length of 10 centimeters. The plumage was general glossy black with yellow feather tufts on the maxillaries, beneath the wings and the undertail coverts. Their songs were simple two notes, took-took, which could be heard for miles.

It was endemic to the montane forests in the eastern part of the Hawaiian Island of Molokai, and Mount Olokai. Subfossil bone finds from Maui, on Mount Olinda at about 4,500 ft above sea level are sometimes referred to in literature as the Maui ʻōʻō, Moho sp.

Little is known about its ecology. It fed on nectar from the flowers of Hawaiian lobelioids.

Causes of the bird's extinction include deforestation, competition from introduced predators, hunting by the Hawaiians due to the much sought yellow feathers to make the precious capes for the nobility, and diseases which were introduced by mosquitoes. It was last seen in 1904 by ornithologist George Campbell Munro. In 1915 Munro tried to verify reports of eventual sightings but he never found this bird again. In 1981 there was an alleged rediscovery on Maui although this sighting has never been confirmed.

Today the bird can only be seen as specimens, paintings, picture notes, and skins. Records of these types are known to be held in Bremen, Cambridge, Massachusetts;. Honolulu; London; Molokai, Hawaiian Islands; New York; and Stockholm.[not specific enough to verify]

All content from Kiddle encyclopedia articles (including the article images and facts) can be freely used under Attribution-ShareAlike license, unless stated otherwise. Cite this article:
Bishop's ʻōʻō Facts for Kids. Kiddle Encyclopedia.