The Bismarck Air Museum is an effort to preserve the large municipal hangar, now known as Hangar #5, at Bismarck, North Dakota. In the 1930s and 1940s a terminal building, a large hangar and the runways were constructed as a part of the Works Progress Administration (WPA) airport development project. Hangar #5 is the last remaining evidence of this effort and it is the goal of the Bismarck Air Museum Foundation to preserve this structure and create an aviation venue for Central and Western North Dakota. 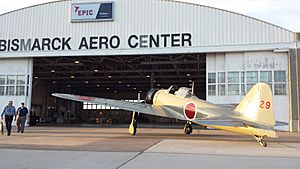 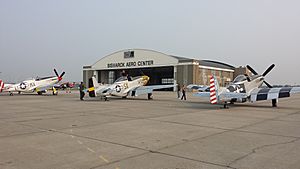 The 7th Ferry Command of the U.S. Army Air Corps used the airport from 1943 to 1946. The land on which the main terminal is now located was formerly part of Fort Lincoln. It was given to the city in 1946, for airport purposes.

Today the hangar continues to serve the needs of aviation and is known as Hangar #5 and is managed by Bismarck Aero Center.

All content from Kiddle encyclopedia articles (including the article images and facts) can be freely used under Attribution-ShareAlike license, unless stated otherwise. Cite this article:
Bismarck Air Museum Facts for Kids. Kiddle Encyclopedia.