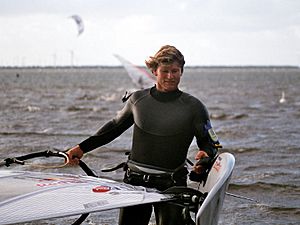 Bjorn Dunkerbeck in the Netherlands during the World Tour (2005) 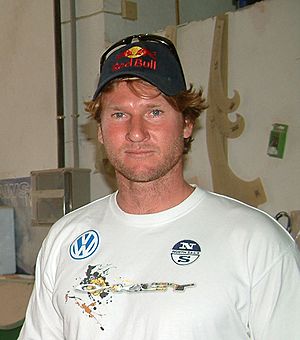 Bjorn Dunkerbeck in Proof board factory

Dunkerbeck is the son of a Dutch father and a Danish mother, but sailed under the number E-11, as he grew up in the volcanic archipelago of Canary Islands in Spain. He dominated the late 1980s and the entire 1990s professional scene, especially in racing, but was also a champion in wavesailing. He currently sails under the Swiss flag (SUI-11).

Both he and his sister Britt have held records for the World Sailing Speed Record Council Nautical Mile.

All content from Kiddle encyclopedia articles (including the article images and facts) can be freely used under Attribution-ShareAlike license, unless stated otherwise. Cite this article:
Björn Dunkerbeck Facts for Kids. Kiddle Encyclopedia.