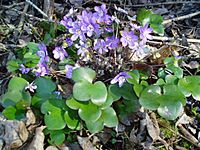 Blåsippor, also known after the opening words Blåsippan ute i backarna står, is a children's springtime song with lyrics written by Anna Maria Roos. It was originally published as a poem in Lilla Elnas sagor in 1894. It was set to music by Alice Tegnér and published as a song in 1895 in volume 3 of "Sjung med oss, mamma!"

Sylvan Beré and Knut Edgardt did an early recording inside the Stockholm Concert Hall on 19 June 1947, as part of a medley of children's songs released on a record in December that year. The song has also been recorded by Ingela "Pling" Forsman on a 1975 album with songs from the songbook "Nu ska vi sjunga".

All content from Kiddle encyclopedia articles (including the article images and facts) can be freely used under Attribution-ShareAlike license, unless stated otherwise. Cite this article:
Blåsippor Facts for Kids. Kiddle Encyclopedia.