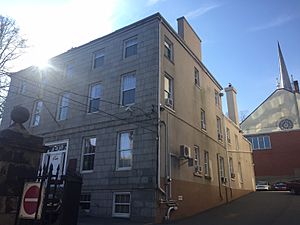 The Black-Binney House was a former residence built in 1819 in Halifax, Nova Scotia which is now a National Historic Site of Canada. The house was built by John Black (merchant) and is reflective of the Palladian-inspired residences common during the late 18th and early 19th centuries in Eastern Canada. In 1857, Hibbert Binney subdivided the property to build the St. Matthew's United Church (Halifax). In 1965 Sidney Culverwell Oland purchased and renovated the building to house the Nova Scotia Division of the Canadian Corps of Commissionaires.

All content from Kiddle encyclopedia articles (including the article images and facts) can be freely used under Attribution-ShareAlike license, unless stated otherwise. Cite this article:
Black-Binney House Facts for Kids. Kiddle Encyclopedia.