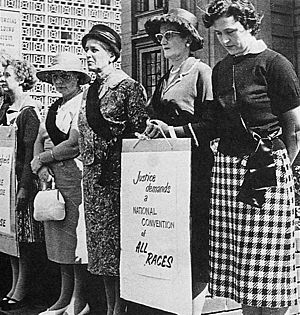 The Black Sash was a non-violent liberal white women's resistance organisation that was founded on 19 May 1955 in South Africa by Jean Sinclair, Ruth Foley, Elizabeth McLaren, Tertia Pybus, Jean Bosazza, and Helen Newton-Thompson.

The Black Sash was founded on 19 May 1955 by six middle-class women, Jean Sinclair, Ruth Foley, Elizabeth McLaren, Tertia Pybus, Jean Bosazza and Helen Newton-Thompson. The organisation was founded as the Women’s Defence of the Constitution League but was eventually shortened by the press as the Black Sash due to the women's habit of wearing black sashes at their protest meetings. These black sashes symbolised the mourning for the South Africa Constitution. The founding members gathered for tea in Johannesburg before they decided to organise a movement against the Senate Act. They succeeded to hold a vigil of 2 000 women who marched from Joubert Park to the Johannesburg City Hall.

The Black Sash initially campaigned against the removal of Coloured or mixed race voters from the voters' roll in the Cape Province by the National Party government. As the apartheid system began to reach into every aspect of South African life, Black Sash members demonstrated against the Pass Laws and the introduction of other apartheid legislation. It would later open Advice Offices to provide information concerning their legal rights to non-white South African's affected by that legislation. Its members "used the relative safety of their privileged racial classification to speak out against the erosion of human rights in the country. Their striking black sashes were worn as a mark of mourning and to protest against the succession of unjust laws. But they were not only on the streets. Volunteers spent many hours in the national network of advice offices and in the monitoring of courts and pass offices." (Speech by Marcella Naidoo, National Director of the Black Sash, June 2005)

Between 1955 and 1994, the Black Sash provided widespread and visible proof of white resistance towards the apartheid system. Its members worked as volunteer advocates to families affected by apartheid laws; held regular street demonstrations; spoke at political meetings; brought cases of injustice to the attention of their Members of Parliament, and kept vigils outside Parliament and government offices. Many members were vilified within their local white communities, and it was not unusual for women wearing the black sash to be physically attacked by supporters of apartheid.

In the 1980s it was part of the National Land Committee assisting the non-white communities that were subject to forced land removals. It would also be involved on the Rural Women's Movement, supporting rural non-white women rights in regards to inheritance and land ownership. In 1983, the organisation called for the abolition of military conscription.

The Black Sash's resistance movement came to an end in the early 1990s with the end of apartheid, the unbanning of the ANC and the release of Nelson Mandela from imprisonment. Its role was recognised by Nelson Mandela on his release and by subsequent political leaders. The organisation was reformed in 1995 as a non-racial humanitarian organisation, working to 'make human rights real for all living in South Africa'.

In May 2015, the organisation celebrated its 60th anniversary as it shifted its focus towards education, training, advocacy and community monitoring. The celebration of the Black Sash history was also marked by the launching of two books, namely Standing on Street Corners: a History of the Natal Midlands Region of the Black Sash and a biography by Annemarie Hendrikz.

All content from Kiddle encyclopedia articles (including the article images and facts) can be freely used under Attribution-ShareAlike license, unless stated otherwise. Cite this article:
Black Sash Facts for Kids. Kiddle Encyclopedia.