The black rosy finch, or black rosy-finch, (Leucosticte atrata) is a species of passerine bird in the family Fringillidae native to alpine areas above treeline, of the western United States. It is the most range-restricted member of its genus, and a popular photography subject for birdwatchers. 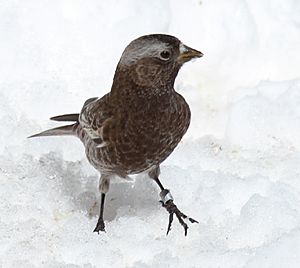 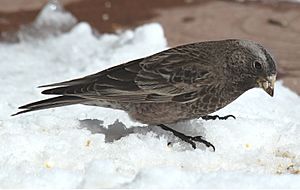 The black rosy finch's breeding habitat is mountain areas above the tree-line, amongst alpine rocks and cliffs. Because of this it is one of the least studied birds in North America. Its distribution range is between that of the grey-crowned rosy finch (L. tephrocotis), which is located to north and west, and the brown-capped rosy finch (L. australis), which is located to the south and east.

The black rosy finch builds a cup nest in a cavity on a cliff. Most birds migrate short distances to lower elevations and further south and return to the alpine areas in April. These birds forage on the ground, may fly to catch insects in flight. They mainly eat seeds from weeds and grasses and insects, often in areas where snow is melting, uncovering food items and new plant shoots are growing. They often feed in small flocks, sometimes mixing with grey-crowned rosy finches. A male will defend its female's territory during breeding season, not just the nest but where ever she goes. This behavior is common with the rosy finches. When breeding both males and females develop throat pouches, known as gular pouches or gular skin, to carry food to their chicks, a trait seen in only one other North American genus, Pinicola. Due to their inaccessibility, actual black rosy finch nests had been reached by only three researchers as of 2002. The nests are made of grass and stems and lined with fine grass, hair, and feathers. They are known to use protected areas such as openings in cliffs, mine shafts, caves, and rafters. They eat seeds and insects, usually foraged from the ground, including snowfields. Their call is a buzz-sounding "chew".

All content from Kiddle encyclopedia articles (including the article images and facts) can be freely used under Attribution-ShareAlike license, unless stated otherwise. Cite this article:
Black rosy finch Facts for Kids. Kiddle Encyclopedia.