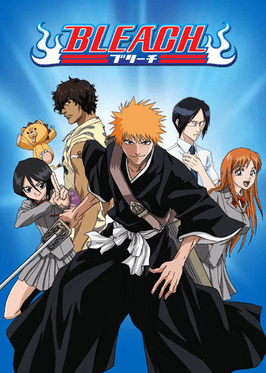 Bleach is an ongoing anime series of manga from Bleach comics. The story is about the life of Kurosaki Ichigo (黒崎 一護) who is a high school student that can see spirits and ghosts. Ichigo is then faced by a shinigami (a death god) Kuchiki Rukia (朽木 ルキア) who hunts deadly ghosts and spirits. On their first meeting, Rukia gives all her powers to Ichigo due to the reason of the safeness of his family since she is hurt and cannot fight. Ichigo then becomes placed one level before Shinigami. Kuchiki Rukia is later charged with criminal activities by an organisation called Soul Society from where she came. On being told about her arrest, Ichigo along with his friends Yasutora "Chad" Sado (茶渡 泰虎), Orihime Inoue (井上 織姫), Uryū Ishida (石田 雨竜) and Yourichi all go to Soul Society to save Rukia.

All content from Kiddle encyclopedia articles (including the article images and facts) can be freely used under Attribution-ShareAlike license, unless stated otherwise. Cite this article:
Bleach (anime) Facts for Kids. Kiddle Encyclopedia.