Blind men and an elephant facts for kids 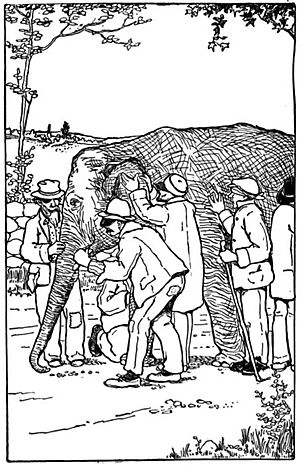 The Blind men and an elephant is an idiom.

The story of the blind men and an elephant comes from India. It is about a range of truths and mistakes. It is also about the need for communication and the need for respect for different perspectives.

The idiom shows the effects of observation and bias. Idioms are a common stumbling block for learners of a language.

A group of blind men (or men in the dark) touch an elephant to learn what it is like. Each one feels a different part, but only one part. For example, one touches only the side and another touches only the tusk.

The blind men discover that they disagree when each describes what he has learned from touching the elephant.

And so these men of Hindustan
Disputed loud and long,
Each in his own opinion
Exceeding stiff and strong,
Though each was partly in the right
And all were in the wrong.

It was six men of Indostan

To learning much inclined,
Who went to see the Elephant
(Though all of them were blind),
That each by observation

They conclude that the elephant is like a wall, snake, spear, tree, fan or rope, depending upon where they touch. None of blind men's description is correct for the whole elephant.

All content from Kiddle encyclopedia articles (including the article images and facts) can be freely used under Attribution-ShareAlike license, unless stated otherwise. Cite this article:
Blind men and an elephant Facts for Kids. Kiddle Encyclopedia.