Block U facts for kids

An upward look at the Block U 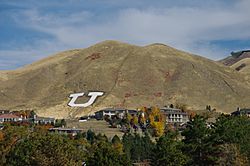 The Block U is a large concrete hillside letter on Mount Van Cott in Salt Lake City, Utah. The stylized "U" is a logo of the University of Utah and is located just north of the university’s campus. It is one of the earliest hillside letters. It sits at 1,600 metres (5,200 ft) above sea level. Lights outlining the Block U flash when athletic teams from the University of Utah win and burn steady when they are defeated.

The official name is the “Block U” and is a registered trademark of the University of Utah.

The history of the Block U begins at the turn of the twentieth century. Each year, as an unofficial activity, students of the University of Utah would climb “The Hill” (Mount Van Cott) and paint their class year on the mountainside. The administration felt that something more permanent was needed. In 1907 the block U was built with limestone. The U is over 30 meters (100 feet) tall and has a surface area of over 455 square meters (5,000 square feet). It can be seen from many different areas of the Salt Lake Valley. It was later modified in 1967 to include 124 lights. By 2001 the Block U had fallen into a constant state of disrepair. Despite several attempted maintenance by students it was not sustainable without a more thorough renovation. 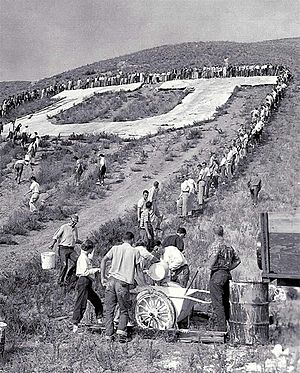 Students repainting the Block U

After the renovation, an official lighting ceremony was held on October 5, 2006 during halftime of the football game between Utah and TCU at Rice-Eccles Stadium.

Visiting the Block U

All content from Kiddle encyclopedia articles (including the article images and facts) can be freely used under Attribution-ShareAlike license, unless stated otherwise. Cite this article:
Block U Facts for Kids. Kiddle Encyclopedia.