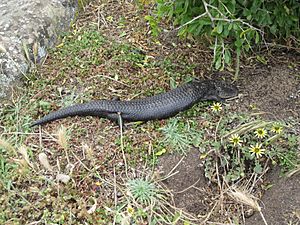 This animal has a fleshy blue tongue which is used to taste the air and scare off potential predators. It is a robust and relatively large member of the skink family (Scincidae) that tends to rely on camouflage and bluff as its primary means of defence. However, if cornered or molested, it can put on an impressive and effective defensive display. If further molested, it will bite as a last resort and although the bite can be painful due to its powerful jaws, the teeth are blunt and generally do not break the skin. The species is harmless, as are all skinks and inoffensive by nature, often being kept as a pet due to its appealing, inquisitive nature and readiness to become tame. They usually adapt well to captivity, eating a wide range of readily available foods.

The lizard is about 14 to 20 inches (35 to 50 cm) long, and is found in wet and dry sclerophyll forests, montane woodlands and coastal heathlands. It is an omnivore with a diet consisting of a variety of insects, snails, carrion, wildflowers, native fruits and other vegetation like select leaves, and occasionally small vertebrates like mice or other young rodents if given the chance. The tail can be dropped (autotomy) when grasped by a predator (like most skinks), but this large skink is much less likely to do so than most other members of the skink family.

The blotched blue-tongued lizard usually emerges from brumation in early spring, which is the mating season. These large skinks are viviparous (give birth to live young), with the highland/alpine form giving birth to relatively larger and fewer young (about five) compared to the lowland form (about 11). The young are usually born in autumn, after a relatively long gestation period. They are also relatively long-lived (reliably reported up to 30 years in captivity) compared to many of the smaller skink species. They have adapted well to some rural and urban areas, where they can be found living on farms and in gardens where they are an asset, as they eat pests such as snails, slugs, and occasionally rodents.

The blotched blue-tongued lizard is among the animals identified from the Pleistocene fossil sites of the Naracoorte Caves National Park.

All content from Kiddle encyclopedia articles (including the article images and facts) can be freely used under Attribution-ShareAlike license, unless stated otherwise. Cite this article:
Blotched blue-tongued lizard Facts for Kids. Kiddle Encyclopedia.