Blow's Down facts for kids

Blow's Down is a 33.1 hectare biological Site of Special Scientific Interest in Dunstable in Bedfordshire. It was notified in 1989 under Section 28 of the Wildlife and Countryside Act 1981, and the local planning authority is Central Bedfordshire Council. The site forms around half of the 62.3 hectare Blow's Downs nature reserve, which is managed by the Wildlife Trust for Bedfordshire, Cambridgeshire and Northamptonshire.

The site has varied habitats with a large area of unimproved grassland, a scarce survival of this important habitat. Cattle help to maintain the pasture. Features include a disused quarry and medieval cultivation terraces. It has a rare plant, Bunium bulbocastanum, and beetle odontaeus armiger.

There is access from Jardine Way and Half Moon Lane. 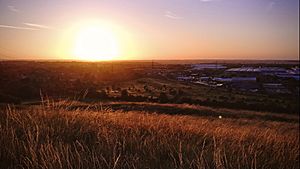 Northwest-facing view of Dunstable from the viewpoint of Blow's Downs at sunset (August 2016).

All content from Kiddle encyclopedia articles (including the article images and facts) can be freely used under Attribution-ShareAlike license, unless stated otherwise. Cite this article:
Blow's Down Facts for Kids. Kiddle Encyclopedia.