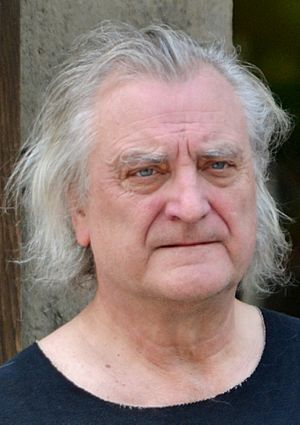 Bořek Šípek (14 June 1949 – 13 February 2016) was a known Czech architect and designer. He was born in Prague. Šípek was known for his individual, unusual, colorful and rich style. He experiments with unexpected and often weird shapes. Šípek has been called the father of "neo-baroque". His architectural works and other designs are known worldwide.

He was the architect of Prague Castle under the presidency of Václav Havel, and designed Havel's Place. Šípek was knight of the Ordre des Arts et des Lettres. He had three sons, one of them with Leona Machálková.

All content from Kiddle encyclopedia articles (including the article images and facts) can be freely used under Attribution-ShareAlike license, unless stated otherwise. Cite this article:
Bořek Šípek Facts for Kids. Kiddle Encyclopedia.