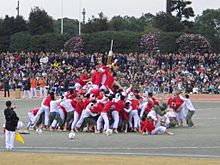 Two squads scrambling for possession of the pole.

Bo-taoshi (Japanese: 棒倒しcode: ja is deprecated , Hepburn: bōtaoshi, "pole toppling"), is a capture-the-flag-like game, played on sports days at schools in Japan. The game, traditionally played by cadets at the National Defense Academy (NDA) of Japan on its anniversary, is famous for its size, wherein two teams totalling 150 individuals each vie for control of a single large pole. Each team is split into two groups of 75 attackers and 75 defenders. The defenders begin in a defensive orientation respective to their pole, while the attackers assume position some measure away from the other team's pole. A team concedes if its pole is brought lower than 30° to the horizontal (beginning perpendicular, or 90°, to the horizontal). Until a rule change in 1973, the pole had only to be brought lower than 45° to the horizontal.

The National Defense Academy of Japan explains the rules and positions as follows:

All content from Kiddle encyclopedia articles (including the article images and facts) can be freely used under Attribution-ShareAlike license, unless stated otherwise. Cite this article:
Bo-taoshi Facts for Kids. Kiddle Encyclopedia.