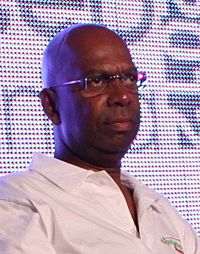 Robert William Collymore (13 January 1958 – 1 July 2019) was a Guyanese-born British businessman. He most notably served as the chief executive officer of Safaricom, a multinational telecommunications company based in Kenya. He became CEO of Safaricom in 2010. Before this position, he worked for Dixons Retail, Cellnet and Vodafone.

Collymore took medical leave in 2017 after being diagnosed with acute myeloid leukaemia. He died of the disease on 1 July 2019 in Nairobi. He was 61.

All content from Kiddle encyclopedia articles (including the article images and facts) can be freely used under Attribution-ShareAlike license, unless stated otherwise. Cite this article:
Bob Collymore Facts for Kids. Kiddle Encyclopedia.