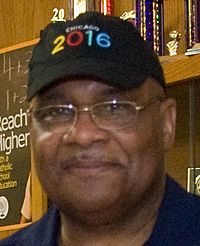 Bob Pickens (February 2, 1943 – April 12, 2018) was an American Olympic wrestler and professional football player. He was born in Chicago, Illinois. He played for the Chicago Bears from 1967 to 1969. Pickens was also an Olympic wrestler, competing in Tokyo, Japan in the heavyweight division at the 1964 Summer Olympics.

All content from Kiddle encyclopedia articles (including the article images and facts) can be freely used under Attribution-ShareAlike license, unless stated otherwise. Cite this article:
Bob Pickens Facts for Kids. Kiddle Encyclopedia.