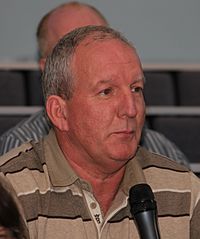 Robert Storey (1956 – June 2020) was an Irish Sinn Fein politician. He was a member of the Provisional Irish Republican Army (IRA) from Belfast, Northern Ireland. He was sentenced to a total of 25 years in jail but was released early under the terms of the Belfast Agreement. He also played a key role in the Maze Prison escape, the biggest prison break in UK penal history.

All content from Kiddle encyclopedia articles (including the article images and facts) can be freely used under Attribution-ShareAlike license, unless stated otherwise. Cite this article:
Bobby Storey Facts for Kids. Kiddle Encyclopedia.