Bodhi and Friends facts for kids

Bodhi and Friends is the flagship property of CIT, a children's multimedia company founded by Poman Lo. CIT has launched the award-winning 3D animation TV series from February 2014, Bodhi and Friends: Space Squad which is broadcast all over China and Hong Kong. CIT has also launched BodhiWorld, a portal which is designed to provide a professional, child friendly platform for parents and children to access and enjoy.

About Bodhi and Friends

Bodhi and Friends: Space Squad is a 3D TV animation season. The first season of 52-episodes premiered on CCTV (China) prime time during the Lunar New Year holiday in 2014, followed by 70 local channels and online portals in China, as well as Now TV (Hong Kong). The second season of 52-episodes will air in 2015. The third season is currently in production. 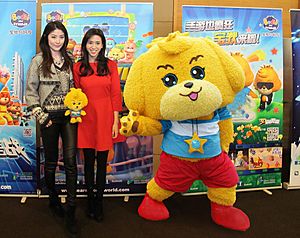 The opening and closing songs are sung by Hong Kong singer Kelly Chen.

All content from Kiddle encyclopedia articles (including the article images and facts) can be freely used under Attribution-ShareAlike license, unless stated otherwise. Cite this article:
Bodhi and Friends Facts for Kids. Kiddle Encyclopedia.