Boggo Road Gaol in Brisbane, Australia, was Queensland’s main jail from the 1880s to the 1980s, by which time it had become notorious for poor conditions and rioting. Located on Annerley Road in Dutton Park, an inner southern suburb of Brisbane, it is the only surviving intact gaol in Queensland that reflects penological principles of the 19th century. After closing in 1992, the larger 1960s section was demolished, leaving the heritage listed section (built as a women’s prison in 1905), which is open to the public through guided tours run by Boggo Road Gaol Pty Ltd.

It was officially known as "Brisbane Gaol" but was commonly known as "Boggo Road" after the original name of the Annerley Road. A new street formed after 1996 now has the name Boggo Road. 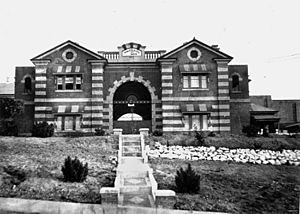 In the 1850s, the district where the gaol was subsequently located was known unofficially as 'Boggo', and by the 1860s the track through the area was known as Boggo Road.

It has been suggested that the name came about because the area was very boggy in wet weather. Another theory is that Boggo (or 'Bloggo' or 'Bolgo') was a corruption of an Aboriginal word meaning 'two leaning trees', and that the road was named after two prominent trees at either One-Mile Swamp or what is now Wilkins Street, off Annerley Road. Another possibility is that Boggo Road was an unofficial and unmaintained short-cut between Ipswich Road and Stanley Street that became very boggy after rain. Boggo Road was officially renamed Annerley Road in 1903, but the colloquial name for the gaol that had long been in use stayed.

In 1863, land off Boggo Road was set aside as a government reserve, finally proclaimed a gaol reserve in 1880. The first cellblock opened on 2 July 1883, built by Robert Porter, contained 57 cells, and was constructed using materials from the demolished Petrie Terrace Jail. In 1903, a new prison was built to hold female prisoners. This later became known as the No.2 Division, and is now the only section still standing, and is listed on the Queensland State Heritage Register.

By 1989 there were 187 male prisoners and the women's facility had around 200 additional prisoners.

Since 1992, the No. 2 Division was home to the Boggo Road Gaol Museum, which featured displays of prison-related artefacts. Throughout the 1990s, ex-officers conducted guided tours of the site, and from 2003 the museum and tours were operated by the Boggo Road Gaol Historical Society, a non-profit incorporated association of volunteers. Since December 2012, Boggo Road Gaol became a tourist attraction for Queensland, with guided tours being conducted by Boggo Road Gaol Pty, who are now officially licensed to run tours and events at the gaol. Like many other similar places around the country, the site also hosts guided ghost tours.

Redevelopment of the surrounding site began in 2006, leading to the temporary closure of the Boggo Road Gaol historical site. Since 2012 the gaol has been re-opened to the public. Boggo Road has since been turned into an urban village called Boggo Road Urban Village and was completed in 2010.

The No. 2 Division and the remnants of No. 1 Division were listed on the Queensland Heritage Register in 1993.

All content from Kiddle encyclopedia articles (including the article images and facts) can be freely used under Attribution-ShareAlike license, unless stated otherwise. Cite this article:
Boggo Road Gaol Facts for Kids. Kiddle Encyclopedia.