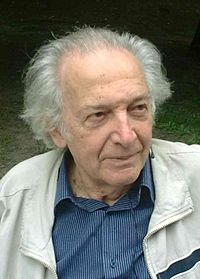 Bohdan Butenko (8 February 1931 – 14 October 2019) was a Polish cartoonist, illustrator, comic book writer and artist, as well as puppet designer. He was born in Bydgoszcz, Poland.

His known works include the comic series Kwapiszon, Gapiszon cartoons, as well as Gucio i Cezar comics (written by Krystyna Boglar). He published his cartoons in numerous children's magazines, such as Płomyk, Płomyczek, Miś, Świerszczyk, as well as the magazines Szpilki and Przekrój, and illustrated many children's books.

All content from Kiddle encyclopedia articles (including the article images and facts) can be freely used under Attribution-ShareAlike license, unless stated otherwise. Cite this article:
Bohdan Butenko Facts for Kids. Kiddle Encyclopedia.