The island is roughly crescent-shaped, and has an area of 2 km2 (0.77 sq mi). It lies to the northeast of the group's main island, Antipodes Island, separated from it by a 1200-metre wide strait. The smaller Archway Island lies immediately to the northwest of Bollons Island.

Bollons Island is dominated by a curved ridge running the length of the island, with a highest point 202 metres (663 ft) above sea level. Cliffs surround the island on all sides except the west.

The island is named after John Bollons, Master of the New Zealand Marine Department vessels, NZGSS Hinemoa and SS Tutanekai. 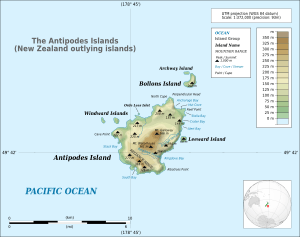 The island is part of the Antipodes Islands Important Bird Area (IBA), identified as such by BirdLife International because of the significance of the group as a breeding site for several species of seabirds.

All content from Kiddle encyclopedia articles (including the article images and facts) can be freely used under Attribution-ShareAlike license, unless stated otherwise. Cite this article:
Bollons Island Facts for Kids. Kiddle Encyclopedia.