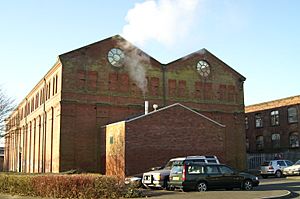 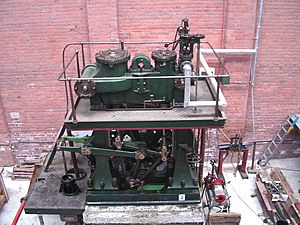 View from above the Park Street Mill non-dead-centre engine 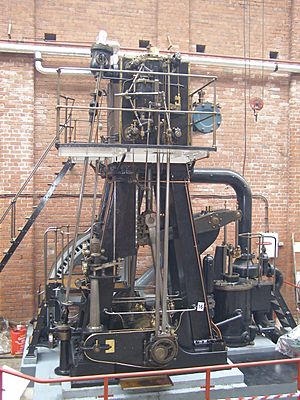 A 'prize exhibit':
an inverted vertical compound engine rescued from Hardman and Ingham's Diamond Rope Works at Royton, near Oldham 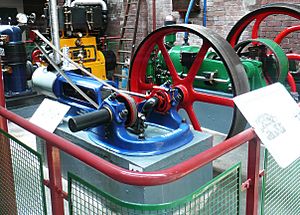 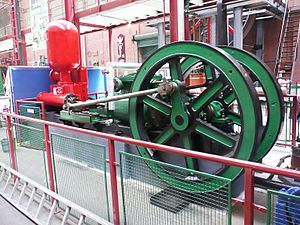 Bolton Steam Museum is a museum in Bolton, Greater Manchester, England, which houses a variety of preserved steam engines. Based in the cotton store of the former Atlas Mill in Mornington Road, it is owned and run by the Northern Mill Engine Society (NMES).

The NMES is a registered charity (No 532259) and the museum has received Accredited Museum status from Arts Council England, the government body responsible for museums policy. The museum is open most Wednesdays and Sundays between 10 am and 2 pm when visitors can view the engines statically when volunteers are working at the museum. Special Open Days are held each year on Bank Holidays weekends when the engines are working under steam power. However, visits by genuine enthusiasts or organised groups can always be accommodated by prior arrangement. (See website). Vehicular access is via Morrisons's Supermarket car park. Parking is free for museum visitors.

The following is a list of the mill engines that have been preserved and are on show at Bolton Steam Museum. For further details of the engine types, see steam engine.

All content from Kiddle encyclopedia articles (including the article images and facts) can be freely used under Attribution-ShareAlike license, unless stated otherwise. Cite this article:
Bolton Steam Museum Facts for Kids. Kiddle Encyclopedia.