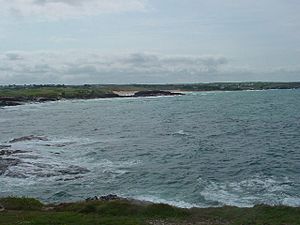 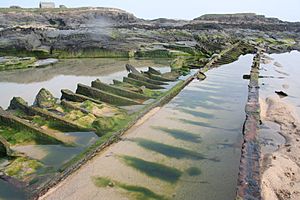 The wreck of the SV Carl

Booby's Bay is a sandy beach near Padstow, Cornwall, England, UK. The beach is wide with many rock pools. It is completely covered by high tide and is popular with surfers, though may be dangerous for the amateur. There is a lifeguard on duty during the summer, but the water is often red-flagged. Access to the beach is by climbing down from the coast path, or walking along the beach at low tide. Dogs are allowed on the beach all year round. Booby's Bay has no beach at the highest tides, the ribs of a wrecked ship appear periodically as the sand is relocated by the sea and prevailing currents. During World War I the three masted sailing ship Carl of the German navy was beached and abandoned in Constantine Bay while being towed to London during a storm.

All content from Kiddle encyclopedia articles (including the article images and facts) can be freely used under Attribution-ShareAlike license, unless stated otherwise. Cite this article:
Booby's Bay Facts for Kids. Kiddle Encyclopedia.