Book-It Repertory Theatre (often shortened to "Book-It") is a regional theatre located in Seattle, Washington. It is a 501-c(3) registered nonprofit corporation, and is devoted to "transforming great literature into great theatre through simple and sensitive production and to inspiring its audiences to read". Founded in 1987, it is now led by Co-Artistic Directors Jane Jones and Myra Platt, and is a 2012 Governor's Arts Award winner and 2010 Mayor's Arts Award winner. It is a member of Theatre Puget Sound and a part of The Kennedy Center's Partners in Education Program. 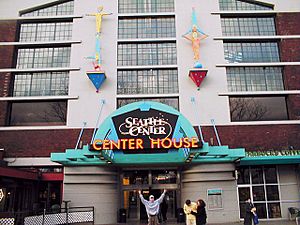 Book-It Repertory Theatre's history begins in 1986, when Co-Artistic Director Jane Jones led the 29th Street Project in New York City, an artistic collective that comprised graduates and company members from the American Conservatory Theater in San Francisco, to experiment with performing short stories for the stage.

After moving to Seattle in 1987, Jane Jones, Tony Pasqualini, Mark Jenkins, Robyn Smith, and Sarah Brooke, among others, formed The Collective at the Pasqualini/Smith acting studio in a three-story walk-up on Pine Street in Seattle's Capitol Hill. Myra Platt, Book-It's future Co-Artistic Director, joined The Collective in 1988. Members of The Collective began to experiment with the concept of Book-It by adapting literature into theatre. They began by experimenting with the performance of short stories. It became an official registered nonprofit under the name Book-It in 1990, and at this time mainly toured to schools and libraries with its performances. Book-It established its first main stage home in 1995, in a 50-seat theatre on Westlake Avenue. Several early shows were performed on Seattle Repertory Theatre stages, until in 2000 Book-It was able to move to their current location at Seattle Center.

When Book-It first moved to Seattle Center, their location was called the Center House. It is now known as The Armory.

In 2019, Book-It announced that founding co-artistic directors Jane Jones and Myra Platt would step down from their roles in summer of 2020.

All of the shows produced by Book-It adhere to a specific style called "Book-It Style," which preserves the author's exact words in the script rather than changing them for the stage. The words and phrases in the book are acted out in dialogue on stage, including descriptions and even taglines. The Book-It Style doesn't rely on a designated narrator for these moments but instead distributes the narrative: descriptions, inner thoughts, etc., among the characters, giving the audience clues about a character based on "point of view."

Book-It Repertory Theatre's Arts and Education Program (formerly called "Book-It All Over") involves a host of different activities aimed at promoting literacy and a love of reading in children. Book-It was able to expand this program thanks to a grant from the Hearst Foundation.

The touring series involves several adaptations of books for children or young adults, and travels to libraries, community centers, and schools in the Seattle area. These performances include a book for each student as well as a study guide and interactive workshop. One of the shows that tours every year is called "Danger: Books!" and features actors reading from books that have been banned or challenged in the US.

This series takes place on the main stage, and usually hosts about three shows per season. They include a short play based on a children's or young adult book, a book-themed craft project, and workshops for younger and older children to participate in after the performance. Parents are encouraged to attend these performances with their children. 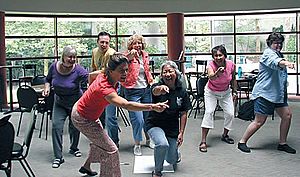 Like many theatres, Book-It hosts student matinees for some of their (audience-appropriate) main stage shows, offering a low-cost option for teachers to bring students to the shows on school trips.

Book-It describes a teacher residency as a "long-term customized program designed with classroom teachers to address specific curricula, academic standards, and students' needs." These programs include a touring series production as well.

Book-It offers workshops for groups of teachers and also participates in a five-day summer program in collaboration with other Seattle area theatres called Bringing Theatre into the Classroom.

The new Circumbendibus series is an off-the-main-stage series featuring non-traditional texts. Book-It started this series in the fall of 2012 with three shows: one based on food writing and cookbooks, one based on geek literature and graphic novels, and one based on a collection of short stories. The short story collection was Jesus' Son by Denis Johnson, and this was expanded and re-located for the second Circumbedibus series in 2013.

All content from Kiddle encyclopedia articles (including the article images and facts) can be freely used under Attribution-ShareAlike license, unless stated otherwise. Cite this article:
Book-It Repertory Theatre Facts for Kids. Kiddle Encyclopedia.