I Ching facts for kids

I Ching (易经), also known as the Book of Changes, is one of the oldest of the Chinese classic texts. It is used mainly for divination (fortunetelling). 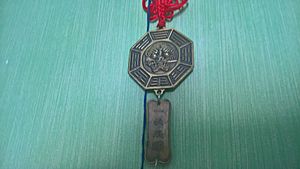 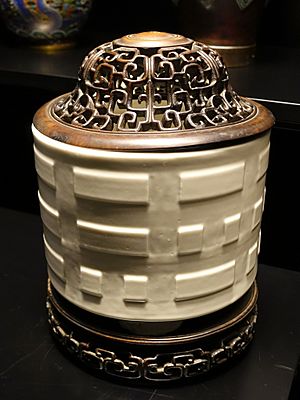 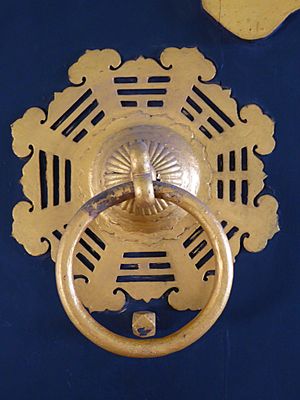 The Contents of I Ching

The contents of I Ching consist of 64 hexagrams and explanation for each. Hexagram is a group of six broken or unbroken lines. The broken line (the line where the middle part is missing) represents yang, and the unbroken line represents yin. From the bottom to top, six lines are gathered in parallel. There exists one different name for one hexagram. In I Ching, the name of one hexagram and the hexagram itself comes first, and after those, there are different explanations for the hexagram and the each line consisting hexagram, from bottom to top. There comes next hexagram after explanations of all lines of one hexagram.

Tools For I Ching Divination 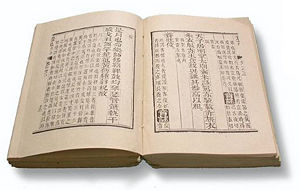 The typical divination using I Ching needs the number of fifty thin sticks usually made from bamboo. Using those sticks with certain order, the person who wants to know the result draws hexagram and finds the explanation in the book. To make process simpler, some people use coin to know the result.

In I Ching, the word 'Heaven'(or sky; it corresponds to the Chinese character '天') is considered as same as God or the absolute being with humane character, who decides the good and evil and makes judgements. For example, the explanation of 26th hexagram (大畜 dà chù) is "the Heaven's bliss is given, therefore, lucky."

Also, there is the idea of constantly changing world, as the explanation of 11th hexagram (泰 tài) tells, "Everything flat will be inclined, and everything gone will be come back." Similarly, the idea of endlessness can also be found. The literal meaning of 63rd hexagram (既濟 jì jì) is "already (既) finished (濟)", but the last hexagram, which is the 64th (未濟 wèi jì), means "not (未) finished (濟)" literally. This means the process of whole world and life is endless and never stops.

All content from Kiddle encyclopedia articles (including the article images and facts) can be freely used under Attribution-ShareAlike license, unless stated otherwise. Cite this article:
I Ching Facts for Kids. Kiddle Encyclopedia.