Boonoo Boonoo is a locality in New South Wales, Australia.

It is a locality about 15km west of Boorook and 12 km north of London Bridge within the Tenterfield Shire and is part of Buller County, New South Wales. The nearest settlement is Liston, New South Wales. It lies just south of the Queensland state border. 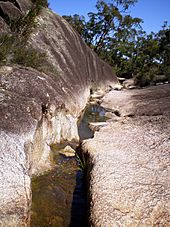 The etymology of Boonoo Boonoo is Aboriginal for "poor country with no animals to provide food" and is pronounced 'bunna bunoo'. The local geography is dominated by prominent granite inselbergs and mountains.

Gold was discovered in the district in 1858, and the economy today is mainly beef cattle breeding and superfine wool production through the breeding of Merino sheep.

All content from Kiddle encyclopedia articles (including the article images and facts) can be freely used under Attribution-ShareAlike license, unless stated otherwise. Cite this article:
Boonoo Boonoo, New South Wales Facts for Kids. Kiddle Encyclopedia.