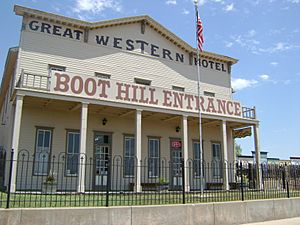 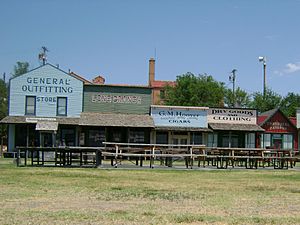 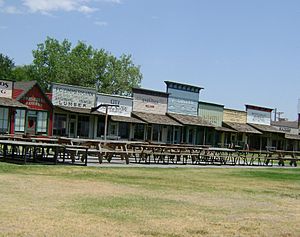 A non-profit entity, the mission of the museum is to preserve the history of the Old West with emphasis on Dodge City. There are over 20,000 artifacts in the complex, including more than 200 original guns. In addition to its historical and educational focus, the museum also provides entertainment for visitors in the form of simulated gunfights and saloon shows.

The Kansas Cowboy Hall of Fame is housed in the museum complex.

The museum is named after the Boot Hill Cemetery, which sits on the northeast corner of the museum complex. "Boot Hill" was a common name for cemeteries used to bury gunslingers in the American West. The term refers to the fact that these men had "died with their boots on" – in other words, in a violent manner, whether in a gunfight or perhaps even by hanging.

Dodge City has embarked on a plan to develop a Heritage District, of which expanding the Boot Hill Museum will be a particular focus. The expansion of the museum would highlight the old heritage of the town, but the Heritage District will also include a water park, additional hotels, new restaurants, and an RV park.

All content from Kiddle encyclopedia articles (including the article images and facts) can be freely used under Attribution-ShareAlike license, unless stated otherwise. Cite this article:
Boot Hill Museum Facts for Kids. Kiddle Encyclopedia.