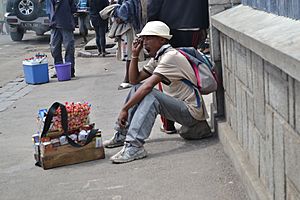 Boredom is an emotional state that comes when a person has nothing to do, and is not interested in anything. To stop boredom, most people do something to occupy or amuse themselves.

The first known use of the word boredom is in the novel Bleak House by Charles Dickens, written in 1852, but the saying to be a bore had been used to mean "to be tiresome or dull" since 1768.

Psychologically, boredom is a bad state in which the person feels a deep lack of interest in what is going on around them, and where it is hard to focus.

All content from Kiddle encyclopedia articles (including the article images and facts) can be freely used under Attribution-ShareAlike license, unless stated otherwise. Cite this article:
Boredom Facts for Kids. Kiddle Encyclopedia.