Boronia umbellata, commonly known as the Orara boronia, is a plant in the citrus family Rutaceae and is endemic to a small area on the north coast of New South Wales. It is an erect shrub with many branches, aromatic, pinnate leaves and clusters of up to ten dark pink flowers in the leaf axils. 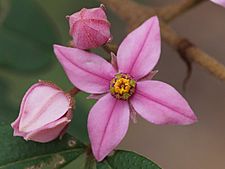 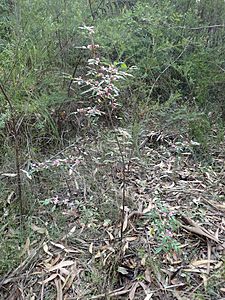 Boronia umbellata was first formally described in 1990 by Peter H. Weston and the description was published in Telopea. The specific epithet (umbellata) is a Latin word meaning "like an umbrella", referring to the umbel-like inflorescences.

The Orara boronia grows in and near damp gullies in forest but is only known from a few locations between Lower Bucca and Glenreagh near Coffs Harbour.

All content from Kiddle encyclopedia articles (including the article images and facts) can be freely used under Attribution-ShareAlike license, unless stated otherwise. Cite this article:
Boronia umbellata Facts for Kids. Kiddle Encyclopedia.