Kids Encyclopedia Facts
This page is about the riverland gallery forests. For the forestry periodical, see Bosque (journal). For formally planted grove of trees in gardening, see bosquet. For other uses, see Bosque (disambiguation). 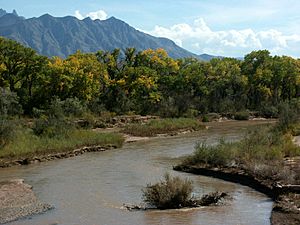 Bosque on the Rio Grande near Bernalillo, New Mexico 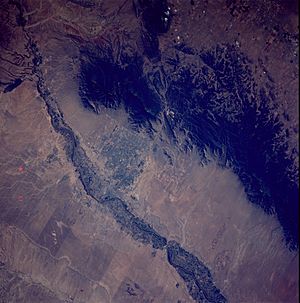 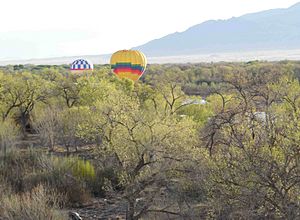 Ballooning through the bosque near the Rio Grande.

A bosque or bosk is a type of gallery forest habitat found along the riparian flood plains of stream and river banks in the southwestern United States. It derives its name from the Spanish word for woodlands.

In the predominantly arid or semi-arid southwestern United States, a bosque is an oasis-like ribbon of green vegetation, often canopied, that only exists near rivers, streams, or other water courses. The most notable bosque is the 300-mile (480 km)-long ecosystem along the middle Rio Grande in New Mexico that extends from Santa Fe south to El Paso, Texas. One of the most famous and ecologically intact sections of the bosque is included in the Bosque del Apache National Wildlife Refuge.

Common trees in the bosque habitat include mesquite, cottonwood, desert willow, and desert olive. Because there is often only a single canopy layer and because the tree species found in the bosque are generally deciduous, a wide variety of shrubs, grasses, and other understory vegetation is also supported. Desert hackberry, blue palo verde, graythorn (Condalia lycioides), Mexican elder (Sambucus mexicana ), virgin's bower, and Indian root all flourish in the bosque. The habitat also supports a large variety of lichens. For a semi-arid region, there is extraordinary biodiversity at the interface of the bosque and surrounding desert ecosystems. Certain subsets of vegetative association are defined within the Kuchler scheme, including the Mesquite Bosque.

The bosque is an important stopover for a variety of migratory birds, such as ducks, geese, egrets, herons, and Sandhill Cranes. Year-round avian residents include Red-tailed hawks, Cooper's hawks, American kestrels, hummingbirds, owls, woodpeckers, and the southwestern willow flycatcher. Aquatic fauna of the bosque include the endangered Rio Grande silvery minnow.

Ongoing efforts to undo damage to the bosque ecosystem caused by human development, fires, and invasive species in the 20th century. Where possible, levees and other flood control devices along the Rio Grande are being removed, to allow the river to undergo its natural cycle. Since 1996, Bosque Ecosystem Monitoring Program (BEMP) of the University of New Mexico has worked on habitat restoration and ecological monitoring within the bosque, as well as raising awareness of the ecological importance of this habitat through educational outreach initiatives.

All content from Kiddle encyclopedia articles (including the article images and facts) can be freely used under Attribution-ShareAlike license, unless stated otherwise. Cite this article:
Bosque Facts for Kids. Kiddle Encyclopedia.