These two buildings are located on the north side of River Street, between School Avenue and Willow Street a short way east of Waltham center. Both are 2-1/2 story brick buildings with mansard roofs providing a full third floor. They have symmetrical four-bay facades, with a pair of entrances in the center bays. Doors and windows are set in segmented-arch openings with brickwork hoods. The building at 163-165 retains the original slate of its mansard roof. These two buildings were built by the company about 1870, probably for upper-level employees, and are a contrast to wood-frame worker housing (now heavily altered) that stand behind them. 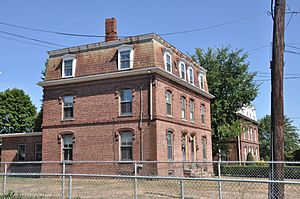 380-410 River Street consists of a pair of rowhouses located on the south side of River Street, between Jackson and Elm Streets. The eastern of them includes six units in a wood-frame structure, while the western one has ten units in a brick structure. Both are two stories in height, with gabled roofs. Entrances to the units are arranged in pairs, sheltered either by a hood supported by Italianate brackets, or by a portico supported by posts. These units were built by the BMC in the 1880s, as it expanded eastward. This type of housing was once quite common in the city, and these rowhouses are one of only two known groups to survive relatively intact (the others are on Lawton Place).

All content from Kiddle encyclopedia articles (including the article images and facts) can be freely used under Attribution-ShareAlike license, unless stated otherwise. Cite this article:
Boston Manufacturing Company Housing Facts for Kids. Kiddle Encyclopedia.