Bothin Marsh is a 106-acre wetland in Marin County, California. Parts of the wetlands are in the Bothin Marsh Open Space Preserve, a regional park. 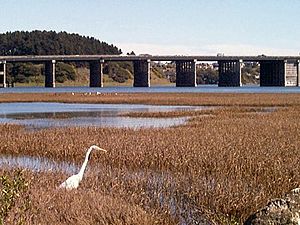 A great egret in Bothin Marsh, with Richardson Bay Bridge in the background.

Jo Julin was instrumental in the preservation of Bothin Marsh in the early 1970s, when developers attempted to drain the marsh in order to begin construction.

Today the Bothin Marsh Open Space Preserve provides habitat for hundreds of native bird and wildlife species, including the endangered salt marsh harvest mouse and Ridgway's rail. It's also a resting stop for over 400 species of migratory birds traveling on the Pacific Flyway.

All content from Kiddle encyclopedia articles (including the article images and facts) can be freely used under Attribution-ShareAlike license, unless stated otherwise. Cite this article:
Bothin Marsh Facts for Kids. Kiddle Encyclopedia.