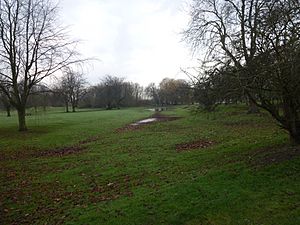 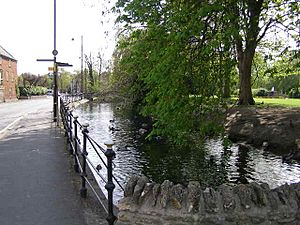 Bourne Eau in South Street.
The Eau was diverted to form the moats of the Castle. This part is the outer moat: the East Bailey (in general terminology, the outer bailey) of the castle was to the right of the picture. The eastern pomoerium was to the left. 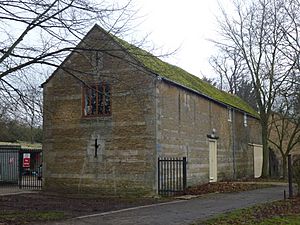 Bourne Castle was in the market town of Bourne in southern Lincolnshire .

A Norman castle was built by Baldwin FitzGilbert (son of Gilbert Fitz Richard, of the De Clare family). In medieval times there was motte and double bailey castle which formed an unusual concentric plan. The castle was destroyed after being used by Cromwell's troops in 1645 and a farmhouse was built on the site. Traces of the enclosed mound and inner and outer moats are all that now survive.

The land is now a park, known as the Well Head, owned by the Bourne United Charities and is open to the public.

All content from Kiddle encyclopedia articles (including the article images and facts) can be freely used under Attribution-ShareAlike license, unless stated otherwise. Cite this article:
Bourne Castle Facts for Kids. Kiddle Encyclopedia.