The Bouwerie Lane Theatre is a former bank building which became an Off-Broadway theatre, located at 330 Bowery at Bond Street in Manhattan, New York City. It is located in the NoHo Historic District. 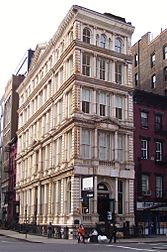 The cast-iron building, which was constructed from 1873-1874, was designed by Henry Engelbert in the Italianate style for the Atlantic Savings Bank, which became the Bond Street Saving Bank before the building was completed. When the bank failed in 1879, the building was sold to the German Exchange Bank, which served the German immigrant community. Prior to the 1960s, the building was used for the storage of fabrics. Then in 1963, the building was converted into a theater by Honey Waldman, who produced several plays there. From 1974 to 2006, it was the home of the Jean Cocteau Repertory Theatre.

The building was purchased by Adam Gordon in 2007 for conversion into a private mansion with a climbing wall, and the Bowery street front used for retail.

In 1967, the building was designated a New York City landmark, and it was added to the National Register of Historic Places in 1980. The AIA Guide to New York City calls it "One of the most sophisticated cast-iron buildings."

All content from Kiddle encyclopedia articles (including the article images and facts) can be freely used under Attribution-ShareAlike license, unless stated otherwise. Cite this article:
Bouwerie Lane Theatre Facts for Kids. Kiddle Encyclopedia.