Box Mine facts for kids 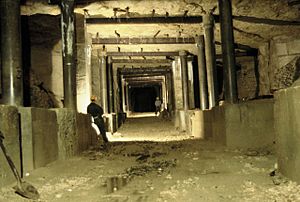 Box Mine is a 56.6 ha (139.9 acres) biological Site of Special Scientific Interest, near the village of Box in Wiltshire, England, notified in 1991.

The Mine consists of a network of tunnels, which originate from Bath stone mining work, initially started during the Roman occupation of Britain. Several entrances to the mine system are present in wooded quarries.

The site's chief biological interest lies in its roosting bats. Although the site is used year-round, it is mainly a site used for hibernation, breeding, and post-breeding dispersal. It is thought that the mines provide stable humidity and even temperatures when compared to smaller sites, and this encourages use by bats, particularly outside the breeding season.

Up to 10% of the total British population of greater horseshoe bat uses the mine at times; a maximum of 230 individuals of this species have been counted at the site. Lesser Horseshoe Bat also uses the mine, as do the four Myotis species – Whiskered, Brandt's, Natterer's and Daubenton's bats.

The site forms part of the Bath and Bradford-on-Avon Bats Special Area of Conservation.

All content from Kiddle encyclopedia articles (including the article images and facts) can be freely used under Attribution-ShareAlike license, unless stated otherwise. Cite this article:
Box Mine Facts for Kids. Kiddle Encyclopedia.