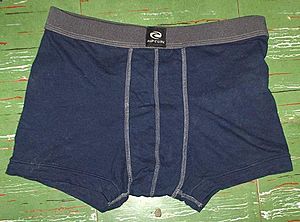 A pair of boxer briefs
Not to be confused with Boxer shorts.

Boxer briefs are men's underwear. They are tight like briefs, but still have long legs like boxer shorts. They are becoming increasingly popular and are worn by lots of teenagers and young men.

All content from Kiddle encyclopedia articles (including the article images and facts) can be freely used under Attribution-ShareAlike license, unless stated otherwise. Cite this article:
Boxer briefs Facts for Kids. Kiddle Encyclopedia.