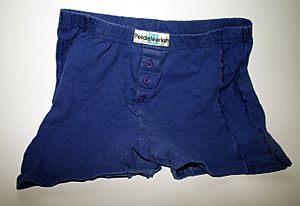 A pair of boxer shorts.
Not to be confused with Boxer briefs.

Boxer shorts are men's underwear. They are shorts with a stretchy band, and named after the shorts worn by boxers.

They were first made in the 1930s, but did not become popular until 1947. These days, briefs (Y-fronts) are sold more than boxer shorts.

Some boxer shorts have openings with a snap button for using the toilet (urinating). Others just have an elastic waistband and can be pulled on or off like briefs. They can be made in different colors or patterns. Television displays more men in boxer shorts than in other underwear.

All content from Kiddle encyclopedia articles (including the article images and facts) can be freely used under Attribution-ShareAlike license, unless stated otherwise. Cite this article:
Boxer shorts Facts for Kids. Kiddle Encyclopedia.