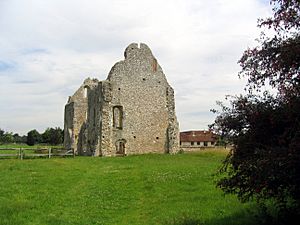 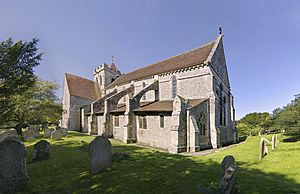 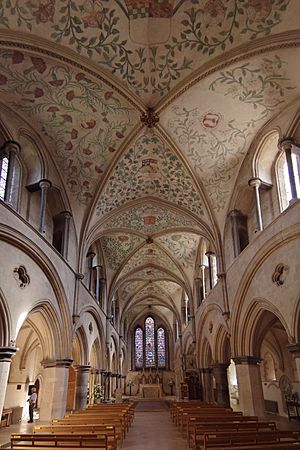 Boxgrove Priory is a ruined priory in the village of Boxgrove in Sussex. It was founded in the 12th century.

The Priory was founded in the reign of Henry I, about 1123 by Robert de Haia (or de la Haye), Lord of Halnacre by gift of the king. A Saxon church had existed on the site before the Conquest. The Priory was founded for three Benedictine monks, and was owned by the Lessay Abbey in Normandy.

In about 1126, upon the marriage of Robert's daughter Cecily to Roger St John the number of monks living at Boxgrove was increased from the original three to six. Robert had died by 1165. By 1187 there were 15 monks. A 19th monk was added to the priory in about 1230 by William de Kainesham, Canon of Chichester.

The Priory was dissolved in 1536. At the time of the dissolution there were eight priests and one novice, as well as twenty-eight servants and eight children living in the priory. After the dissolution, the Priory church became the parish church.

The Priory church is still in use as the Church of St Mary and St Blaise. The Battle of Britain Pilot Billy Fiske is buried in the churchyard.

The ruins are a Grade I listed building.

All content from Kiddle encyclopedia articles (including the article images and facts) can be freely used under Attribution-ShareAlike license, unless stated otherwise. Cite this article:
Boxgrove Priory Facts for Kids. Kiddle Encyclopedia.