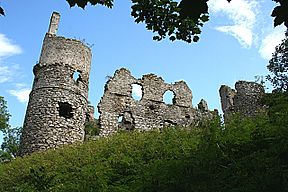 Around 1320 the land was owned by Thomas Randolph, 1st Earl of Moray, but passed first to the Edmonstone family and then, by marriage, to the Ogilvies. Sir George Ogilvy of Dunlugas built the castle in the late 16th century. Occupation continued until after 1723.

Charles McKean suggested that building was slightly earlier, constructed by Alexander Ogilvy of Boyne before 1575 for his bride, Mary Beaton, a companion of Mary, Queen of Scots brought up at the French royal court.

James VI of Scotland stayed at the castle in July 1589. His ambassadors Andrew Keith, Lord Dingwall, George Young, and John Skene brought him news from Denmark of the progress of his marriage negotiations and preparations of ships, jewels, and a silver coach for Anne of Denmark.

The site of Boyne castle is naturally fortified, above the steep gorge of the Burn of Boyne, or Boyne Water, which protects it on three sides, while on the south there is a dry moat, nearly 60 feet (18 m) wide.

It has been said that Boyne Castle “was once a splendid place with fine rooms, above vaulted basements, and had large windows”. The remains are overgrown and ruinous,

The four corner towers are round, and about 22 feet (6.7 m) in diameter. There is a twin-turreted gatehouse to the south. Entrance is by a causeway, which is raised and walled. There are remains of two walled gardens.

The castle ruin is a Scheduled Ancient Monument.

All content from Kiddle encyclopedia articles (including the article images and facts) can be freely used under Attribution-ShareAlike license, unless stated otherwise. Cite this article:
Boyne Castle Facts for Kids. Kiddle Encyclopedia.