Brampton Island is an island in the Cumberland Group, off shore from Mackay in the Mackay Region, Queensland, Australia. The island lies within the Great Barrier Reef World Heritage Area, and the majority of the island forms the Brampton Islands National Park, however there is a resort located on the island. The highest point of the island is Brampton Peak, 214 m above sea level.

The traditional Aboriginal owners of Brampton Island are the Ngaro people, although no permanent population was present when Captain James Cook passed through the area in June 1770. The island was eventually given its European name in 1879, when Staff Commander Bedwell of the Royal Navy recognised the group of islands and named each after towns in the county of Cumberland. 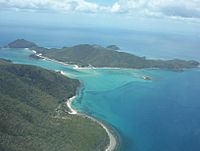 View of the island from the north east from a plane

Settlement and the development of the resort

In 1916, Joseph Busuttin and his family became the island's first European settlers. The island's resort was first established in December 1933 when two of the Busuttin's sons welcomed passengers from the P&O ship SS Canberra. Busuttin's sons then sold the resort and left in 1959.

There were several owners briefly over the next two years, Carapark and Hotels of Australia. In 1961, the island was purchased for 80,000 pounds by the McLean family which had been operating Roylen Cruises from Mackay which was started by Tom McLean MBE an ex-World War II Army Engineer. Tom had been with the Dock's company in PNG and spent considerable time on and about the Fairmile "B"s. In due course there was a fleet of fairmiles operating from what was possible Australia's worst positioned port of Mackay.

Tom McLean's son Fitzroy, who previously had been the Master of an ex-World War II fairmile, Roylen Star, became the manager of the island. He was the ultimate host and proved to be a considerable drawcard over many years. Another ex Roylen skipper, Ray Smith, became the Assistant Manager. The resort developed quickly with the aid of the Roylen Cruise fleet, operating a system called Cruise n Stay, by utilising both vessels and the accommodation at the Island. These cruises toured the reef and Whitsunday's, often returning to Brampton to drop off people wishing to stay there. Brampton was perhaps the most idyllic of all the islands as it was protected by Carlisle Island and the resort was positioned facing the north so the prevailing and often blustery Southerly winds had no effect on the island or its pristine beaches. With the addition of Brampton, came an influx of tourists and tourist dollars.

A small railway was introduced to run stores and supplies from the "Deep Water Jetty" to the resort. This was a rail system based on the sugar cane trains operated in the nearby "Sugar Town" of Mackay. Due to the huge tidal differences (up to 6 metres or so) the jetty at the resort could only be utilised at certain times due to the depth of the water, whereas the "Deep Water Jetty" could be used around the clock.

The island also featured regularly on Bob Dyers television show "Pick box". It hosted many television, media and other personalities with many spending their honeymoons at the resort. Some notables included John Farnham, John Laws and Daryl Summers, as well as the English pop group "The Police". An engineering feat during its day saw an airstrip built on the island in 1965 which operated TAA aircraft including (during the 1970s) De Havilland Twin Otters. It was, however, a rather short airstrip and several aircraft came to grief there including one of TAA's Twin Otters. Fortunately, no one was actually killed in any of the accidents there.

A saltwater swimming pool was completed in 1972. The island was operated in a less than formal manner and many tourists came back year after year to enjoy that informality. There were several cyclones over this period and the island suffered considerable damage. It was also used as a stop off point for numerous Royal Australian Navy vessels including the "Attack" class patrol boats and Landing Craft. In the 1970s Fitzroy McLean's sons, Ian, Mark, Fitzroy Junior and Peter all worked on the island.

In the late 80's the island started demolishing some rather quaint villa style accommodation and constructed a new upmarket block referred to as the "Blue Lagoon" block. The Island also featured well in the Cruising Yacht Clubs with 2 notable events every year - "The Bowen to Brampton" and the "Mackay to Brampton" events. In 1985, Trans Australia Airlines purchased Brampton Island, upgraded the resort and subsequently sold it to P&O Resorts in late 1997. Three million dollars was spent on a major refurbishment of the resort before it was purchased by Voyages.

The resort was again sold in 2010 to United Petroleum, and was later closed for major renovation in 2011. the resort is still closed and no renovations have yet begun. 2014

On 3 April 2008, a single engine Piper Cherokee crashed into the ocean just after taking off from Brampton Island. The pilot and four passengers survived and were rescued by helicopter.

Most of the island is part of Brampton Islands National Park, which is home to a range of wildlife and plants. There are also 17.8 km of walking tracks and a campsite, which requires a permit to use.

The Brampton Island Resort accommodates up to 220 guests in 106 rooms and is popular with couples. The resort offers a number of free and paid-for activities, including fishing trips, snorkelling and scenic flights.

All content from Kiddle encyclopedia articles (including the article images and facts) can be freely used under Attribution-ShareAlike license, unless stated otherwise. Cite this article:
Brampton Island Facts for Kids. Kiddle Encyclopedia.