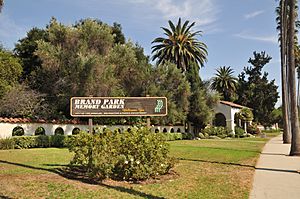 Brand Park is a recreation facility in Mission Hills, Los Angeles, California. It is located directly south of the Mission San Fernando Rey de España. Its western section contains the historic Brand Park Memory Garden along with the Brand Park Community Center which is used as a multi-purpose area for events. In its eastern section there are grass fields, two baseball diamonds, and a parking lot. 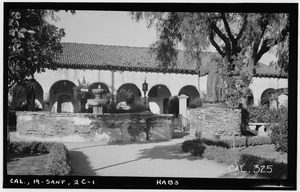 A photo of one of the fountains in Brand Park as well as the statue of Junípero Serra taken by Henry F. Withey in March 1936.

The park is named after Leslie Brand, a developer who owned property near the mission. He donated a portion of this land to the City of Los Angeles in 1920; this portion became Brand Park.The Brand Park, Memory Garden was designated a California Historic Landmark (No.150) on Jan. 11, 1935.

All content from Kiddle encyclopedia articles (including the article images and facts) can be freely used under Attribution-ShareAlike license, unless stated otherwise. Cite this article:
Brand Park (Memory Garden) Facts for Kids. Kiddle Encyclopedia.