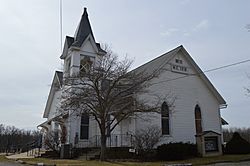 Brandon is an unincorporated community in Knox County, in the U.S. state of Ohio.

Brandon was originally called Four Corners, then Hildreth, but the site was never legally platted on account of a land dispute in the 1840s. A post office was first established there under the name Hildreths in 1839. The post office's name was changed to Brandon in 1848, and remained in operation until 1902.

All content from Kiddle encyclopedia articles (including the article images and facts) can be freely used under Attribution-ShareAlike license, unless stated otherwise. Cite this article:
Brandon, Ohio Facts for Kids. Kiddle Encyclopedia.