In string theory and related theories such as supergravity theories, a brane is a physical object that generalizes the notion of a point particle to higher dimensions. Branes are dynamical objects which can propagate through spacetime according to the rules of quantum mechanics. They have mass and can have other attributes such as charge.

Mathematically, branes can be represented within categories, and are studied in pure mathematics for insight into homological mirror symmetry and noncommutative geometry.

The term "p-brane" was coined by M. J. Duff et al. in 1988; "brane" comes from the word "membrane" which refers to a two-dimensional brane.

A p-brane sweeps out a (p+1)-dimensional volume in spacetime called its worldvolume. Physicists often study fields analogous to the electromagnetic field, which live on the worldvolume of a brane. 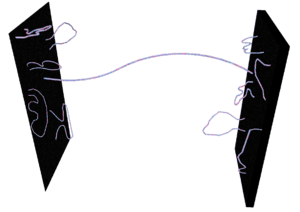 Open strings attached to a pair of D-branes

In string theory, a string may be open (forming a segment with two endpoints) or closed (forming a closed loop). D-branes are an important class of branes that arise when one considers open strings. As an open string propagates through spacetime, its endpoints are required to lie on a D-brane. The letter "D" in D-brane refers to Dirichlet boundary condition, which the D-brane satisfies.

One crucial point about D-branes is that the dynamics on the D-brane worldvolume is described by a gauge theory, a kind of highly symmetric physical theory which is also used to describe the behavior of elementary particles in the standard model of particle physics. This connection has led to important insights into gauge theory and quantum field theory. For example, it led to the discovery of the AdS/CFT correspondence, a theoretical tool that physicists use to translate difficult problems in gauge theory into more mathematically tractable problems in string theory.

All content from Kiddle encyclopedia articles (including the article images and facts) can be freely used under Attribution-ShareAlike license, unless stated otherwise. Cite this article:
Brane Facts for Kids. Kiddle Encyclopedia.