Bratton Castle (also known as Bratton Camp) is a bivallate Iron Age hill fort on Bratton Down, at the western edge of the Salisbury Plain escarpment. The hill fort comprises two circuits of ditch and bank which together enclose a pentagonal area of 9.3 hectares (23 acres).

The Westbury White Horse, a hill figure first documented in 1742, lies on the west side of the hill fort. 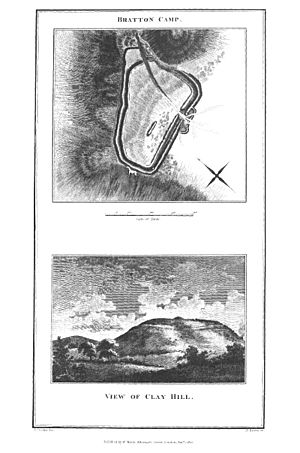 Pencil sketches of Bratton Camp, from The Ancient History of Wiltshire by Sir Richard Colt Hoare

The short west side and the long north side occupy the crest of steep escarpment slopes and the ditches are stepped one above the other, the rampart slopes rising 5 metres (16 ft) and 6 metres (20 ft) above the base of the ditches. The defences here span a total width of 30 metres (98 ft). The south side of the hill fort and the southern half of the east side cross Bratton Down and here the twin ramparts are of roughly equal height and 30 metres (98 ft) in width. The northern half of the east side crosses the head of a re-entrant valley where the outer rampart and ditch have been largely destroyed by quarrying or landslips and the construction of a farm track. The short north east side straddles a narrow steep-sided ridge up which runs the Port Way. This passes through a possible original entrance, at which point the two ramparts have separated to form a small annexe, the outer ditch of which has, in places, been removed by quarrying. Quarrying has, in the past, also taken place within parts of the interior of the fort.

The hill fort was one of the sites excavated by Jeffery Whittaker prior to 1775, which is thought to have been one of the earliest archaeological excavations to have taken place in Wiltshire. The excavation was poorly documented but it is believed that Roman and Saxon coins were found within the vicinity of the fort. Later excavations were carried out by William Cunnington and Sir Richard Colt Hoare. Notably three barrows within and around the castle were excavated and recorded

A Long Barrow, within which was found two primary cremations on a platform with a pile of pebble stones and one chalk bead covered with 'vegetable earth', intermixed with pottery and animal bones at four and five feet deep. Three secondary inhumations were found near the top.

A Bowl barrow containing two cremation urns, the one placed within the other, and an interment of burnt bones. The large urn was broken in pieces; the small one, containing about three pints was better preserved and is contained within the Wiltshire Heritage Museum. It is described as particular in its shape, having a perforated and projecting handle.

A small round barrow less than one foot high, contained a circular cist with a crouched skeleton, but no relics. The skull is at Cambridge Museum. 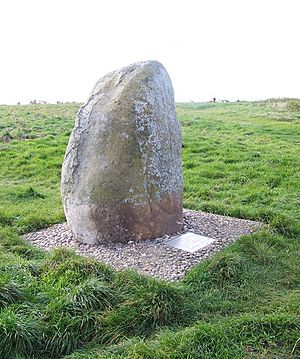 The site is located at , to the southwest of the village and parish of Bratton, in the county of Wiltshire. The hill has a summit of 225 m (738 ft) AOD. The site and surrounding downs are easily accessible by public footpath.

All content from Kiddle encyclopedia articles (including the article images and facts) can be freely used under Attribution-ShareAlike license, unless stated otherwise. Cite this article:
Bratton Castle Facts for Kids. Kiddle Encyclopedia.