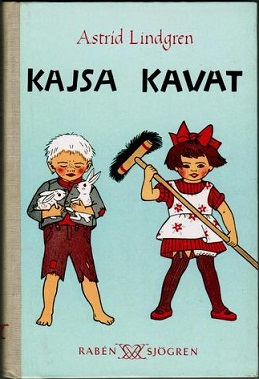 Brenda Brave Helps Grandmother (original title: Kajsa Kavat) is a story by Astrid Lindgren about a young girl named Brenda (Kajsa) in Sweden. The book about the character has been translated into many different languages.

As a baby, Brenda is put onto the doorstep of a woman, that she later calls grandmother. Her grandmother takes care of her until she breaks her leg. Then Brenda suddenly is the one to take care of her grandmother. She goes to the market and sells the bonbons that her grandmother made and cleans the house. As Brenda has helped out so well, she gets the doll for Christmas that she had always wished for.

The story was first published in 1950, in a novel collection called Kajsa Kavat. Later it was published as a picture book on its own, illustrated by Ilon Wikland. It was translated into many languages, among them English and German. While the Swedish name of the girl is Kasja Kavat, she has a different name in other countries: Brenda Brave (English), Greta Grintosa (Italian) and Polly Patent (German).

In Germany the book was also edited into a theatre play, which was shown in the theatre of Gütersloh. One of the attractions of Astrid Lindgren's World also deals with Brenda Brave and her story.

In 1989 there was a short film called Brenda Brave was made, which tells Brenda's story. It was directed by Daniel Bergman.

All content from Kiddle encyclopedia articles (including the article images and facts) can be freely used under Attribution-ShareAlike license, unless stated otherwise. Cite this article:
Brenda Brave Helps Grandmother Facts for Kids. Kiddle Encyclopedia.