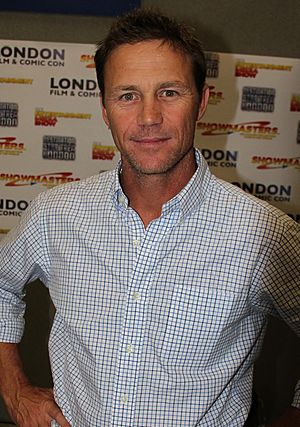 Brian Krause (born February 1, 1969) is an American actor. He grew up in El Toro, California. He is best known for his role as Leo Wyatt on the WB Network television series Charmed from 1998 to 2006.

Krause made his first movie as Richard Lestrange in the movie sequel Return to the Blue Lagoon (1991). A year later, he also starred opposite Alice Krige, playing Charles Brady in the horror movie Sleepwalkers.

Brian and his wife Beth Bruce had their first child, Jamen, in 1996. They divorced in 2000. He dated co-star Alyssa Milano. During his time off the set, he enjoys being a handyman which was his job before acting (and was his character's job when he played Leo Wyatt on Charmed). He also enjoys golf and auto racing.

All content from Kiddle encyclopedia articles (including the article images and facts) can be freely used under Attribution-ShareAlike license, unless stated otherwise. Cite this article:
Brian Krause Facts for Kids. Kiddle Encyclopedia.