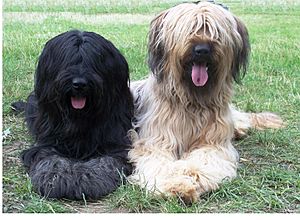 the two common versions of the Briard

The Briard (or Berger de Brie, Shepherd (dog) from Brie) is a French kind of dog. Originally, the Briard was used for herding livestock. The Briard is an old race of dogs, which is mentioned in a manuscript of the 14th century (about hunting). The Briards exist in different colors, the most common ones are pale brown and black. The Briard is a long-haired breed of dog; the short-haired Beauceron is probably the same race. The Briard is a working dog breed; it has also been used as a search-and-rescue dog, and in certain roles as a therapy dog, for example to help people with certain conditions, such as those with Post-traumatic stress disorder.

All content from Kiddle encyclopedia articles (including the article images and facts) can be freely used under Attribution-ShareAlike license, unless stated otherwise. Cite this article:
Briard Facts for Kids. Kiddle Encyclopedia.