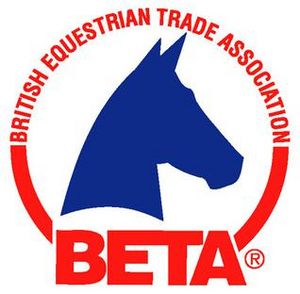 The association was formed in 1979 and currently has over 800 member companies.

BETA is a company limited by guarantee, with member companies in six categories. From the member companies, the organisation is run by a council of 22, with representation from each category. The headquarters are situated west of Wetherby, off the A661, in Spofforth with Stockeld in North Yorkshire.

The categories of membership are:

BETA conducts regular research on behalf of its members, including on areas such as the number of riders in the United Kingdom and attitudes of riders towards spend in the sector.

All content from Kiddle encyclopedia articles (including the article images and facts) can be freely used under Attribution-ShareAlike license, unless stated otherwise. Cite this article:
British Equestrian Trade Association Facts for Kids. Kiddle Encyclopedia.