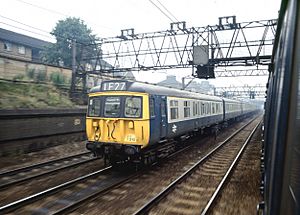 The front of a British Railways Class 312 stock train in InterCity Blue/Grey livery passes through East London on a working to London Liverpool Street Station, as seen from the open window of another train. The yellow stripe above the windows denotes the 1st class seating, which is at the London end of the train for the convenience of 1st class passengers (so they will be nearer the ticket barrier when they alight).

The British Rail Class 312 is a type of alternating current (AC) electric multiple unit (EMU) built in 1966-1974 intended for use on outer-suburban passenger services. It was the last class of multiple unit to be constructed to the British Rail Mark 2 bodyshell, and also the last with slam doors. This latter feature contributed to their relatively early withdrawal (between 25–28 years old, compared to a life expectancy of 30 years). Ironically, the examples withdrawn by First Great Eastern and later 'one' Great Eastern between 2003 and 2004 were slightly newer than most of the carriages the operator is introducing during 2005 for use on its premier express service.

All content from Kiddle encyclopedia articles (including the article images and facts) can be freely used under Attribution-ShareAlike license, unless stated otherwise. Cite this article:
British Rail Class 312 Facts for Kids. Kiddle Encyclopedia.