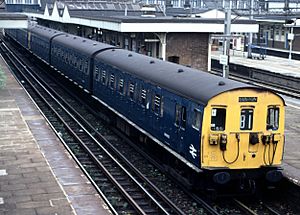 A London-bound Class 501 train calls at Harrow and Wealdstone. The B1 headcode signifies that this train worked the Euston-Watford (and vice versa) service. 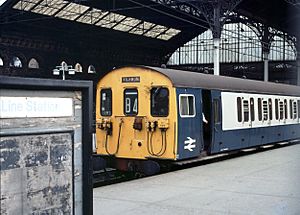 A refurbished Class 501 train awaits departure time at Broad Street station, shortly before the latter's closure. The B4 headcode signifies that this train worked the Broad Street—Richmond (and vice versa) service.

The British Rail Class 501 electric multiple units were built in 1957/58 for use on the former LNWR/LMS suburban electric network of the London Midland Region. A total of 57 three-car units were built.

All content from Kiddle encyclopedia articles (including the article images and facts) can be freely used under Attribution-ShareAlike license, unless stated otherwise. Cite this article:
British Rail Class 501 Facts for Kids. Kiddle Encyclopedia.